A Guest Blog by Jean Alfieri: Lesson Learned on the Long Road from Durango 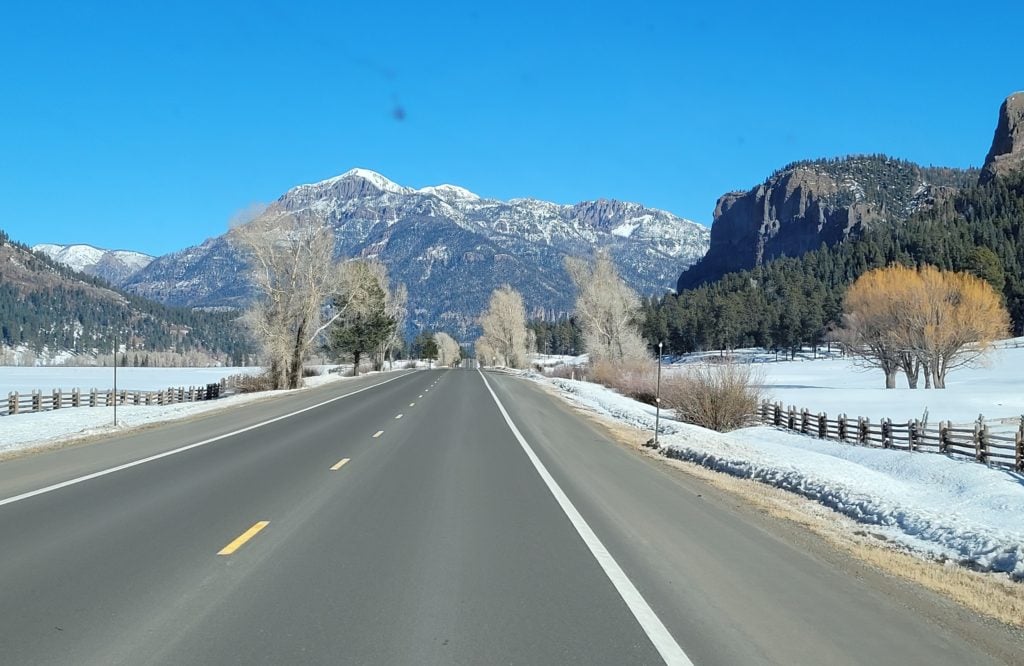 Lesson Learned on the Long Road from Durango

The journey started in the most normal way. I was meeting a new “rescue” partner for a trip to Durango for the Humane Society. My volunteer job as a Rescue Ranger is to make the day-long trip from Colorado Springs, stay the night, then return, starting at 7:00am, making stops at various partnering shelters to pick up dogs. We usually get older or bigger breed dogs that are not as popular, or ones needing medical or behavioral care. Smaller shelters, short on resources, struggle to care for such animals, so transferring them to “us” is a positive option.

Carrie and I hit the road to Durango at 9:00am. We found much in common and there wasn’t a single gap in our conversation during the eight-hour drive. We checked into our rooms then grabbed dinner before retiring.

We were up and out early the next morning. It was a brisk four degrees. To our dismay, we discovered the sliding side door and the back door to the cargo van were frozen. We could get into the cab, so we turned it on and let it warm up. In an hour, we’d meet our first shelter partner right down the road. We cranked up the heat in the back and were confident the doors would loosen by then. We stopped for coffee, then parked at the shelter. Scott, driving the van bringing dogs from New Mexico, arrived promptly at 8:00am.

Carrie and I stepped out to meet him. He had ten dogs and nine puppies to unload. The kennels had been prepared the day before and we were ready to start the transfer. I pulled firmly on the sliding door of the van, but it wouldn’t budge. Not even a little. I tugged some more. Nothing. I went around to the back. That door was still frozen as well. Carrie tried. Scott tried. All to no avail.

We considered our very limited options. We got buckets of hot water from the shelter and poured them down the doors. It didn’t work and may have made matters worse. Getting it into a warm garage would help, but this was a huge cargo van. We needed a local hero – the fire department! I grabbed my phone and found the nearest station just ten minutes away. Scott agreed to wait, and we headed off.

I rang the doorbell to the firehouse and out stepped Hero #1. I briefly explained our issue. He grabbed his coat and as we moved toward the vehicle, Hero #2 emerged. They conferred, inspected the van, and pulled on the sliding door. It didn’t budge. Not even a little. Hero #1 walked to the back and pulled on that door. Shazam – it opened!

Running an hour behind schedule, this was good enough for us. Carrie and I thanked the firemen and headed back to the shelter where Scott and nineteen dogs waited patiently. En route, we discussed our new strategy. Loading dogs from the back was possible, but not nearly as easy, given the three-foot step. Getting in from the back required we hoist ourselves with the assistance of a pull-handle, which we couldn’t use while maneuvering a dog in our arms. We agreed that Carrie would be on the ground, handing the dogs up to me. I would receive them and put them in their respective kennels. This would take longer but was the safest option.

Back at the shelter, we tried the sliding door one more time. Still frozen shut. Scott brought each dog around and told Carrie their name. She relayed this to me so I knew in which kennel they should be placed. She started handing off dogs with a manner and efficiency that reminded me of … me! She was very succinct, checking off each dog on the list, handing them off and expediently moving on to the next.

I, on the other hand, felt a wave of … what was it? Not “compassion,” though I feel that whenever I’m assigned to these runs. It’s wonderful to rescue dogs, knowing this may be their only chance at life. I always pray it’s not just any life they get, but the BEST life.

Yet, this feeling was stronger than compassion. It was a sense that even though we were running late and could make up time by moving quickly through this process, what we really needed to do was slow down. As Carrie handed me the third of nine puppies, that’s exactly what I did. I began welcoming each of them.

“Good morning, little cutie, how are you? You will be riding with your litter mates right here.”

I received the next puppies:

“How are you doing this fine day? So glad you’re here. We’re in for a long drive, so settle in and get comfy.”

“So happy to see you! We’ve been looking forward to meeting you. I’m Jean and this is Carrie, we’ll be your escorts today.”

“Hello Momma. Aren’t you beautiful? You did a great job with these puppies!”

“Hello, Handsome. Ooh, aren’t you a big hunk of love?”

They all seemed to enjoy the special attention and when Carrie heard me greeting each dog, she chuckled and slowed down.

During our drive, we pondered this. How often do we rush past each other? What if we could be as genuinely kind to our fellow humans as we were to these dogs? If we could forego our schedule for a few minutes to show compassion, consideration and sincerely care about each other … wouldn’t our neighborhood, our city, our world be a better place?

There’s much to be said about due dates and timelines, but if we learned anything in 2020, it’s that nothing is certain except our love for one another. It may have seemed like a routine trip on an otherwise nondescript winter day, but I emerged a different person. From now on, I’m letting my heart lead.